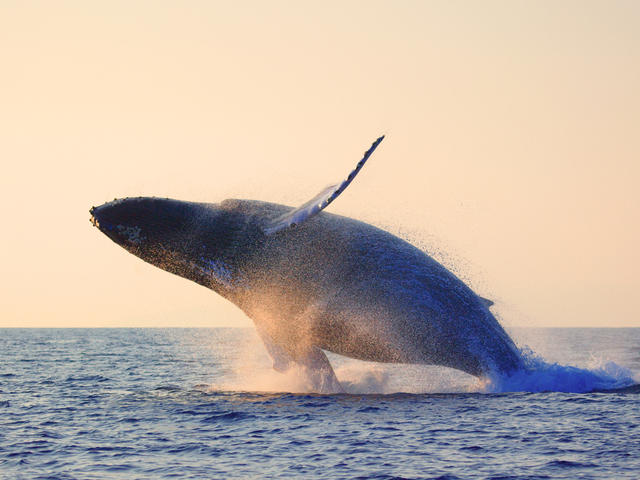 Long before Free Willy brought the majestic whale to the silver screen, these denizens of the deep have captured the imagination of humankind. Our initial interaction with whales goes back to when the risk of harpooning a whale was worth the generous meat and blubber supply.

The fate of whales and humans has remained intertwined through the ages and though its centered largely round hunting, they have entertained and delighted many folks fortunate enough to witness them breaching and blowing (and even calving), more so if the encounter is in the wild — many lucky scuba divers have witnessed these beautiful creatures. They’ve also sunk many a sailing ship and yacht on ocean crossings; and tormented their hunters, giving inspiration to literary classics such as Moby Dick.

On the other end of the scale they’ve incited extreme action on behalf of groups like Greenpeace who advocate for an end to all whaling. No matter your viewpoint, whales without doubt possess the power to fuel strong emotions in people over the world.  The threat today, though, lies less in their pursuit – as the aboriginal hunters fade from cultural memory and countries adopt legislation outlawing the killing of these ocean giants – but rather in the increasing environmental pressures they face.

World Whale Day was first celebrated in 1980 in Maui, Hawaii to honour the Humpback and raise awareness about the pressure our whales and oceans are under daily from pollution, unsustainable fishing methods, and habitat destruction among other issues. Hosted on Saturday the 13th of February, World Whale Day saw people from around the globe gather in aid of these amazing cetaceans.

If you feel harpooning a whale is cruel, how would it make you feel to know that a whale had died a much slower and more painful death due to choking on a plastic bag you’ve carelessly discarded somewhere in your travels?

It is time to understand that our actions today have long-term consequences. So stand up for our whales and our oceans today – or better yet, go scuba diving – and get an opportunity to watch as these majestic creatures go about their life aquatic.